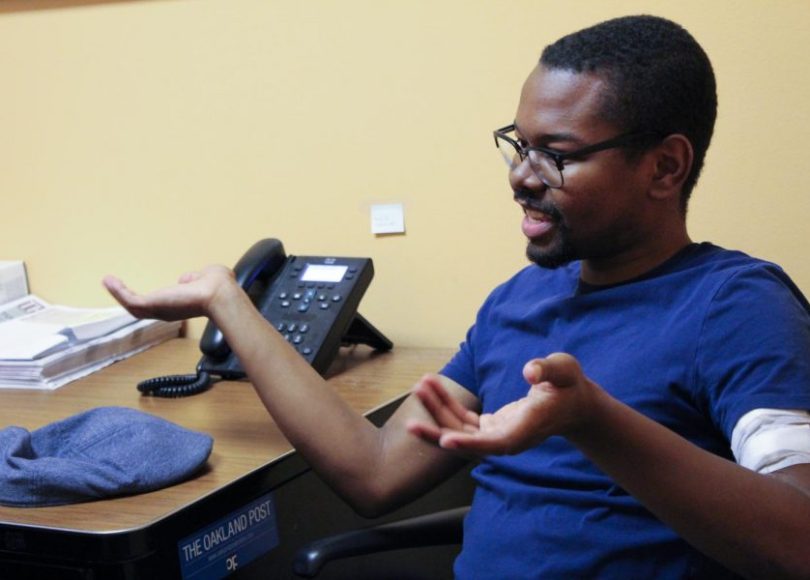 This story was previously published in the Oakland Post on Sept. 18, 2019.

Twenty-three-year-old Cesante Ward was eager to pursue a career with his new bachelor’s degree in human resource development when he graduated from Oakland University in August 2018.

But in the midst of “trying to adult,” another obstacle was thrown his way — he suffered from a kidney failure.

Ward was born with chronic renal disease. As a result, his natural kidneys were underdeveloped and their functions eventually deteriorated over time, forcing him to rely on dialysis until the age of 12, when he received a kidney transplant.

Transplants from deceased donors, like the one Ward received, typically last between 10 and 15 years. Last December, that transplant failed, forcing Ward to go back on dialysis, a less effective option than a kidney donation because of its potentially negative long-term health effects.

“College is already tragic enough,” the now 24-year-old OU alumnus said. “Three months after graduating is when it all went downhill again.”

Now Ward is looking for a new kidney donor.

“A lot of people don’t know that they can live with one kidney,” he said. “I’m kind of looking for a living donor, just because they last longer.”

However, the number of individuals in need of kidney donors far exceeds the number of living donors. As of January 2019, Ward estimated that, in the U.S. alone, over 101,000 people were in need of kidney transplants, with only 6,500 living donors available. Potential donors must undergo an extensive interview process and a variety of tests before becoming eligible to donate.

Deceased kidney donors are also available — and are more commonly how people receive transplants — but according to the American Kidney Fund, the average wait time for a deceased donor is about five years. In contrast, a transplant from a living donor can be scheduled within a year and typically lasts between 15 and 20 years.

But desperate times call for desperate measures, and after six months of silence, Ward, a self-proclaimed introvert, saw no choice but to return to social media to spread the word.

His first Facebook post received well over 200 shares, for which he was grateful. In speaking out about his own situation, Ward said he also hoped to raise awareness for others fighting similar battles.

“There’s just a lot of people with disabilities you can’t see,” he said. “There’s a lot of people that aren’t even open about it, just ‘cause it’s so close to home. And I think a big part of just going through life in general is connections, especially in college.”

Ward has been advocating for individuals with similar disabilities for much of his life. For years, he volunteered at North Star Reach, a summer camp based in Ann Arbor for children with serious or life-threatening illnesses. This year would’ve marked Ward’s 11th year as a volunteer there, but the extensiveness of his treatments prevented him from returning. Currently, he undergoes treatments for three-and-a-half hours, three days a week.

“It kind of just makes me think that petty stuff that we go through in college and everything is nothing,” he said.

Ward spent five years at OU, during which he worked for the on-campus Barnes & Noble Bookstore, the School of Education and Human Services Counseling Center and University Housing. He also served as vice president of the OU Bowling Club and was involved with the Center for Multicultural Initiatives. He said his experiences during his time at OU ultimately gave him the courage to share his story and advocate for himself.

“[College has] made me open up and talk to people,” he said. “That’s how I came to appreciate college life is getting involved. Otherwise, it’s just crying on your scantrons to get your answers — wherever the teardrop lands!”

Ward said it’s important for people to realize that donating a kidney is a big commitment and is a personal decision. Interested individuals will go have to go through an extensive interview and several tests to ensure their kidney is compatible with the recipient.

“A donor is saving a life at the end of the day,” he said. “That connection or bond between those two people is going to be amazing.”

For more information, visit the United Network for Organ Sharing website. Those interested in becoming a kidney donor for Ward should contact the University of Michigan Transplant Center at 1 (800) 333-9013 or visit the center’s website.