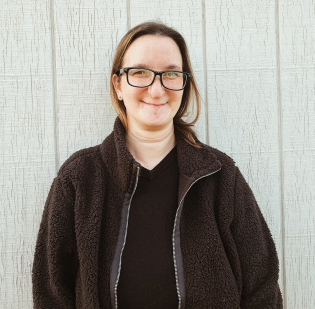 Rebecca Agauas is a strong and brave woman. She is a sister, a daughter, a friend, a caregiver, an ally, and a chronic illness fighter. Because of her chronic illnesses, she experiences fatigue every single day, but still manages to stay positive and strong throughout the day.

Becca loves coffee, spending time outside, brunch, blogging, photography, and exploring local cafes. On top of all that, Becca is a chronic illness fighter. Becca lives with hashimotos, intracranial hypertension and prediabetes, which has also caused her to develop irritable bowel syndrome, also known as IBS.

Intracranial hypertension is a build up of spinal fluid and pressure on the brain. At the age of 30, Becca started getting consistent headaches. This is also the same age her mother was when she was diagnosed with MS, so Becca began to get tested for it as well. After Becca got a MRI, her results found that she actually had a mild case of intracranial hypertension. Often times, there is specific thing or reason that causes it.

In the photo above, Becca wears a Koldtec Halo headband. The headband uses targeted cooling therapy to help subside the pain and discomfort caused by headaches and migraines.

Becca’s major symptoms include severe headaches and migraines. She takes Motrin 800 to help with the pain as needed. Becca now goes and sees a neurologist regularly. Her neurologist appointments are similar to any other doctors appointments where they talk about her symptoms and the management of the symptoms, as well as an annual MRI.

Rebecca takes prescription medication to help with her chronic illnesses. The first kind of medication she a takes is called Levothyroxin, which she takes for her thyroid autoimmune disorder, Hashimotos. Hashimotos is an autoimmune disorder that attacks the thyroid. It causes fatigue, hormonal imbalances, sensitivity to temperature, hair thinning and/or loss, brittle nails, and heart palpitations. Hashimotos runs in her family, including her mother and sister, who later developed thyroid cancer. The medication helps to keep the thyroid in balance.

The second prescription she takes is called Metformin. Becca takes Metformin to keep her blood sugar regular, as a result of low blood sugar from prediabetes. Over time, as a result of taking the Metformin, Becca has developed irritable bowel syndrome, or IBS. Becca now must watch what she eats and adhere to certain dietary restrictions such as no red meat and no dairy.

The last medication she takes is Motrin 800, which she takes as needed to help with the pain and discomfort caused by her Intracranial Hypertension headaches and migraines.

The most important part of Becca’s life is her mother. Despite living with chronic illnesses herself, she is a caregiver to her mother who lives with MS. Becca and her mother Faith love spending time together and enjoying their favorite activities which usually are made up of brunch, coffee shops, spending time exploring locally, and taking photos. Becca and her mother are both allies and activist in the chronic illness community and as well as the MS community.

Some of the things Becca does as an activist and ally in the communities are attending speeches and events on behalf of MS, going to walks to show their support, and meeting new people and making friends in the community who all learn from each other, encourage each other, and help each other grow. These are the things that make Becca who she is.