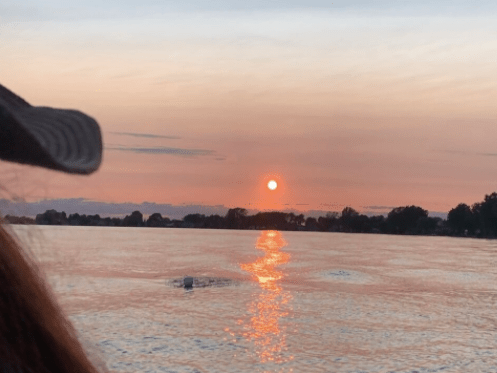 Within my years in the education system, the effects of global warming have been drilled into my head. It’s hard to grasp the idea of a healthy and thriving planet. The ideas of recycling and reusing have been a constant lesson to my generation. Now that I am becoming an adult it is especially important for me to understand the various things I can do in order to move our planet forward.

Throughout my childhood, I grew up on the lake. I had witnessed the change in lake levels throughout the years. Every year the lake levels continued to get lower and lower. This was scary as a child as I simply didn’t understand why it was happening. Along with that, ice fishers no longer did what they loved. The ice hasn’t completely frozen in years.

This has caused me to [think of] climate change constantly in my head. The aspects of lake life and the changing levels of the water have allowed me to have an understanding of climate change and global warming. Now that I am an adult I have been able to grasp these events by changing the way I act toward our planet.

Although I may not have a huge effect on the planet there are little things we can all do to make a change. For instance, I recycle all the plastic and cans that my household takes in. Secondly, I avoid plastic straws by using metal reusable straws.

Although these things don’t make climate change go away overnight, these little actions can add up to a much healthier planet. I do these things in order to keep the lakes I love and grew up with intact. I have had so many shaping memories on these lakes and would be devastated to see them go.

“There are no passengers on Spaceship Earth. We are all crew.”

45% of counties experienced temperatures normal for the 20th century. During the winter season we are clearly able to see the change in the climate.

I remember when I was growing up the amount of snow we had experienced throughout the winter. There were constant snow days and ice warnings all over the news. Record-breaking temperatures were often below freezing.

Things seem to have changed. Nowadays it feels as though the real winter season is pushed back multiple months. Living on the lake I was able to witness this change first hand. The lake seems to never freeze over and if there is any ice it doesn’t even appear until late January.

It is undeniable that Michigan’s climate is changing. Most of the state has warmed two to three degrees (F) in the last century. Heavy rainstorms are becoming more frequent, and ice cover on the Great Lakes is forming later or melting sooner. The great lakes hold a strong story and foundation for the experiences we have as Michigan citizens.

Global warming has affected our lakes and how they thrive or shall I say don’t thrive. The warming of the lakes has also affected the fish populations. Warmer water temperatures also mean fewer eggs, leading to fewer fish successfully hatching into Lake Michigan. This decrease in fish population not only will affect the environment and survival of our beloved lakes; but also affects the livelihood of many people of Michigan. Many people may make a living by catching these fish.

As the temperatures continue to stay warm, it has been important for me and my generation to learn what we can do. We must lead in protecting our planet for our children and future generations. Unfortunately, we cannot ignore the climate crisis any longer. Some ways in which our younger generations can voice our concern is through voting and taking part in political stances for cleaner energy.

Along with that, we are able to implement change by doing our daily duty of recycling and reusing. Although we cannot change our planet overnight, every day we can slowly move toward a new and brighter future.