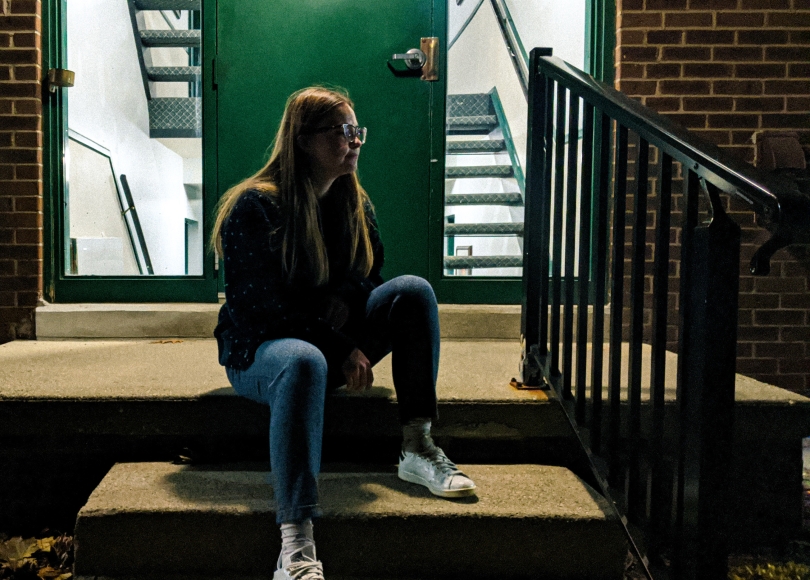 The COVID-19 pandemic has brought with it significant changes to nearly every aspect of life in 2020. The phrase, ‘in these unprecedented times’ seems to be part of a new, incredibly bizarre norm.

Quarantine, masks, and a stomach-churning, always present fear of a virus we can’t seem to understand are now part of daily life. Sydney Thaler is learning to roll with it.

As senior at Oakland University studying International Relations, Sydney found her life, like many others, tipped upside down in March of 2020.

“At the beginning of all this, I thought, like, this is great! A break from life,” Sydney said. “But after a few weeks I realized it really wasn’t. I got really depressed and started binge eating.”

While quarantining is much safer than going out and potentially becoming infected with COVID-19, it has its drawbacks, especially on mental health. The CDC even has a page dedicated to coping with these difficult times.

Social distancing, while doing wonders to keep us safe, has had a detrimental effect on the mental health of many. Humans are social creatures, and a lack of closeness and the ability to see our friends has taken its toll. Not being able to see other people in general, especially at the beginning of this year, has been difficult, Sydney said.

“I had to start seeing my therapist online rather than in person,” she said. “It was still good to talk to her, but my whole family was in the house with me now. It was kind of hard to be truthful with her – I didn’t want them to overhear me.”

Sydney says being back home with family was a strange adjustment. She’d been living in the dorms at college and working at Ulta, then suddenly she was back living with her family and furloughed by her job.

“I mean, I was happy to be still making money at home, I was on unemployment,” Sydney said. “It was insane though, I was making more doing nothing than I ever did at work.”

“I was getting kind of bored too, though. It’s boring sitting home, alone in your house, week after week.”

“My manager called me at the end of July and I came back to work. I’ve heard that some people are still on furlough,” Sydney said. She has mixed feelings about being back to work in a retail environment.

“I’m very scared that I’m going to get COVID,” she said. “The other day this guy came in to return his wife’s perfume and had no mask on… It scares me now when people get close to me in public.”

With going out in public being such a risk, Sydney says she misses the way life used to be just a year ago and wishes she’d known how good things were. “I really miss living on campus,” she said. “I love my family, but living at home, I feel like I’m not as independent as I was before.”

“I feel like, not only do I live at home, but I also have to rely so much on other people. You know, I have to rely on them to wear a mask when I’m at work, things like that. It’s scary. I miss being able to not worry if the person next to me was going to kill me by just breathing,” Sydney said.

Quarantine hasn’t been entirely gloom and doom for her, though. Despite the constant fear and finding it hard to get motivated and take on much at the beginning of the era of COVID-19 social isolation, Sydney says now she’s started to make choices for the better of her physical and mental health.

“I started working out, just doing Chloe Ting workouts that I found on YouTube,” she said with a laugh. “I also have found that I use hand sanitizer and stuff a lot more. I always used to use hand sanitizer when I went out in public, but now I find myself using it even more often.”

“For two weeks I even did yoga every day. I’ve been trying to do stuff that’s better for me.”

Despite the fear of getting sick and the challenges of online class, working and coping with mental health on top of it all, Sydney is doing alright. She is confident that she’ll get by alright, though she worries for the fate of the country as we continue to see rising COVID-19 cases.

“Things are different now, and you know, I think as Americans we are a very individualist society, not a collectivist one,” she said. “People, I think, only really care about the virus if it directly affects them, but that isn’t fair to everyone else. These people who don’t care because they don’t have it could be asymptomatic, out there spreading it without realizing.”

She says the best thing we can do is take care of ourselves and be mindful of others while in public. While Sydney doesn’t see this ending any time soon, she is hopeful that we will all find a better way to deal with this strange new normal and work toward making everything safer for everyone.